Current commercial offshore wind-farm installations are based on foundations that are fixed to the seabed, which limits potential installation locations and the amount of wind power they can harness. Floating offshore wind-turbine structures allow wind projects to be installed in deeper waters for superior wind power, reduced visual impact, and greater choice of location. It also allows much of the work onshore, minimising the use of heavy lift vessels and risky offshore operations.

The WindFloat project has developed a floating foundation for offshore wind turbines with a simple, economic and patented design. The WindFloat dampens wave- and turbine-induced motion, enabling wind turbines to be sited in previously inaccessible locations. It also lowers the levelised cost of energy (LCOE) by reducing structural weight as well as installation, operational and, eventually, decommissioning costs.

In October 2011, Principle Power deployed a full-scale, 2MW WindFloat prototype 5km off the coast of Portugal. Adapted from the principles behind floating oil and gas platforms, the structure was completely assembled and commissioned onshore before being towed 400km along the coast. The system produced more than 17 GWh of energy to the local grid and provided high levels of availability, despite the extreme weather conditions in the Atlantic Ocean.
Having successfully demonstrated the potential of its patented technology, Principle Power transitioned its operations to focus on ways to successfully commercialise the prototype and bring it to a global market. It applied to InnoEnergy through an Investment Round and, having completed the initial feasibility study, joined the Innovation Projects programme.
In addition to investing €4 million in the project, InnoEnergy worked with Principle Power on every aspect of the advanced technology development and commercialisation processes, including engineering, third-party analysis and certification, business development and dissemination. A key area of focus was to further reduce the levelised cost of energy to ensure that the WindFloat technology is in line with global price targets for commercial offshore wind projects.
Principle Power has now completed the first set of detailed design packages for the construction of a pre-commercial wind farm, to be constructed by consortium partner WindPlus. The goal is to optimise the WindFloat designs for current 5 – 8MW turbines as well as the 8MW-plus turbines of the future.

InnoEnergy In Action With : 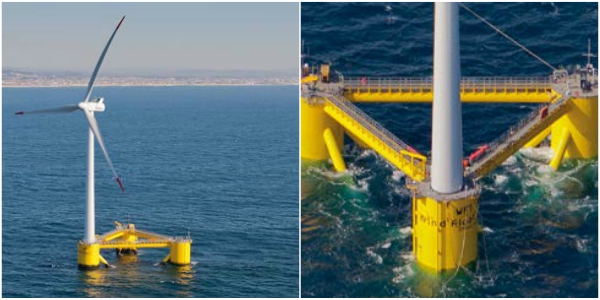 “InnoEnergy really is the perfect match for us. We had already demonstrated that the technology works and were at the stage of turning it into a commercial concept. In InnoEnergy, we gained a partner who would collaborate with us and support both the company and the technology as we transitioned into a truly market-focused business.”